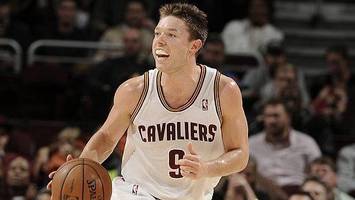 The NBA summer league is well and truly underway but it has finally begun for those of us who are following the young Australians hoping to make an NBA roster.
There are 4 Aussies hoping to play well enough to continue onto the final rosters of an NBA team at this years Las Vegas Summer league and today 2 of them had starting roles.
Mathew Dellavedova was the starting point guard for the Cleveland Cavaliers who took on the Milwaukee Bucks in a highly anticipated bout between the number 1 (Andrew Wiggins) and number 2 (Jabari Parker) draft picks from the this years NBA draft.
Wiggins dominated and lead all scoring for the game with 18 points but last years number one pick Anthony Bennett looks to be in good form and finished with 15. Hopefully Bennett can put his rough start in last season behind him and play the way a number draft pick should. Mathew Dellavedova although not getting much attention behind his star draft pick team mates had a stellar game finishing with 13 points, 6 assists and 9 rebounds. Hopefully he will continue his impressive performances from last season. Delly finished last season with the highest +/- score on the whole cavaliers roster. With the addition of Lebron James in the line up and the removal of Jarret Jack lets hope Delly gets the minutes to run the point as hopefully the back up point guard for Kyrie Irving.
Here's a clip of a Delly assist to a huge dunk from Anthony Bennett

York Knicks. Goulding however did not have the stellar start Delly did and didn't make the impact I'm sure he was hoping to make with only 6 points off 2 from 7 from the 3 point line. The Mavericks must see some potential in the young NBL star to give him a starting role. Hopefully in the coming matches he will hit his rhythm and show what a hot shooter he is.

Tomorrow we will again see a few Aussies hit the court with Dante Exum making his summer league debut with the Utah Jazz as they take on the Philadelphia 76ers, Cameron Bairstow should get some decent minutes when the Chicago bulls take on the LA Clippers and hopefully Goulding will hit some shots and show what a streaky scorer he can be when the Dallas Mavericks take on the Minnesota Timberwolves.

Its exciting times when Aussie basketball fans might get to see potentially 7 Australian suiting up for NBA rosters in the coming season. With established players like Andrew Bogut, Aron Baynes and Patty Mills already showing their skills lets hope more teams look down south for potential talent when scouting for bench roles.
Posted by Fletch at 01:49