The Melbourne Tigers having just lost Chris Goulding for 6-8 weeks to an ankle injury have just lost their star imoprt point guard Stephen Dennis and team captain Tommy Greer. Stephen Dennis has broken his Archilles and is out for the season while Tommy Greer has torn his pectoralis tendon and will be out for 3 months. This is very dissapointing for the Tigers and for the league, Stephen Dennis was an incredibly talented guard who could have a had massive season with the Tigers. They will struggle to find a strong replacement this late into the preseason with most leagues around the world about to kick off thier respective seasons. Head coach Chris Anstey had this to say concerning the injuries, “It’s extremely disappointing for both players. The guys love both Steve and Tommy on and off the court and are shattered for them.” The Tigers play the Adelaide 36ers in Mt Gambier this thursday as the preseason starts to draw to a close. Hopefully they can find a new gun import like Dennis and maybe we can see him back next season.
Posted by Fletch at 13:03 No comments:

Chris Goulding was injured during the Melbourne vs Townsville game of the NBL's preseason Blitz tournament in Sydney. Goulding came down on a Townsville players foot while attempting a 3 point jumpshot and has injured his ankle. It was looking like a season ending injury for Chris but luckily for Melbourne he should recover to return to the league by some time in November. This was looking like a big blow to the Melbourne Tigers with Chris being a rising star in the franchise and was the Tigers MVP last season. Goulding also got an invite to play with the Cleveland Cavaliers Summer league team and since his confidence and abilities have been looking even better then last year. Lets hope he can recover quickly and return to the excellent form he was in during the preseason. Melbourne Tigers head coach Chris Anstey has not yet decided as to if he will find a short term replacement for Chris but has stated it may be an option. “If Chris' injury drags out longer then we would like some insurance on our roster,” Anstey said.
Posted by Fletch at 13:56 No comments:

With the Melbourne tigers losing the first half of their game to the Wollongong Hawks the Perth Wildcats have won their 4th straight NBL preseason tournament. The Wildcats look like they will remain strong going into this NBL season after losing their star shooting guard Kevin Lisch in the offseason. From is performances in the preseason James Ennis is living up to the star hype he had coming from his first round NBA draft pick with the Miami Heat. But not only that the tournament has given us a glimpse into the possible star players for this NBL season. The guard imports from Melbourne Stephen Dennis, New Zealands Kerron Johnson, Wollongong's Rotnei Clark and Townsville's Josh Pace all look like possible MVP candidates this year. Several local players also had big games like Chris Goulding, Aj Ogilvy and Brad hill who had a 42 point game showed their hand at stepping up and becoming primary point scorers.
There is a lot to look forward to in this NBL season. It look like a well rounded league with all teams looking quite strong. Hopefully the season ahead can remain as competitive as the preseason 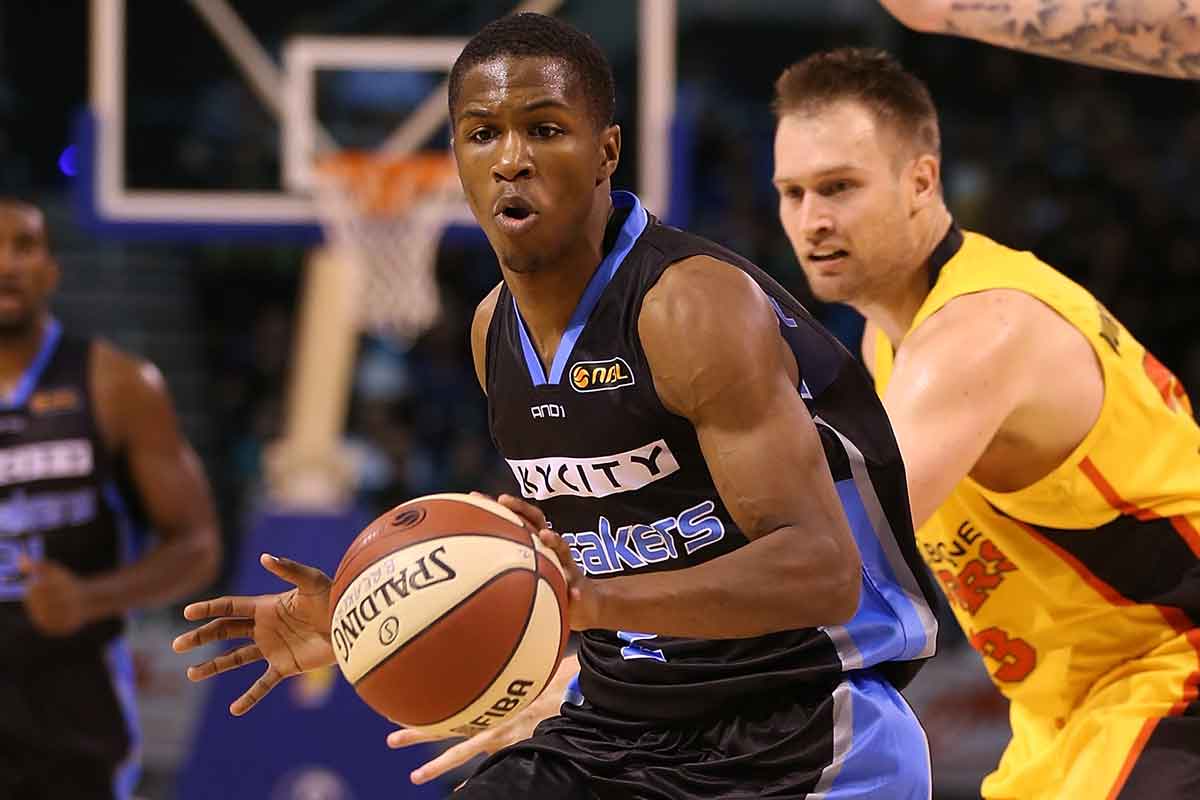 Kerron Johnson showing his skills against the Mebourne Tigers
Posted by Fletch at 22:26 No comments:

There is a stream of the NBL preseason tournament, the Preseason Blitz available to watch at:
http://www.ustream.tv/channel/sydneykings

They stream live games and post the games so you can watch them later if you missed it. This is an awesome addition for the upcoming season with a free stream similar to the NBL.tv application only on a far lower quality. With the refereeing adjustments made to this years NBL season with refs calling more hand fouls it is leading to a more entertaining game with a >100 point win from the Adelaide 36ers over the Perth Wildcats earlier this week.  For the gamblers out there watching this stream can give an insight into the season ahead and make an early choice for the championship team and possibly pick up a roughie before the season commences and the odds get reduced who may take out the championship. I know I like what i see from Adelaide at this stage.

Since its been so long since i have posted here i will go into the teams playing in the 2013-14 preseason blitz tournament prior to the start of the season. During the off season their were some big changes to teams across the board. The biggest would probably have been the two best teams in the league last season have lost their starting point guard (breakers) and starting shooting guard (Wildcats). This is a big blow to these two organisations losing their go to player and probably the best players in the league both taking out an MVP award in the last two years. This has forced the two strongest teams to reassess the team make up and work at gaining some new imports. Every other team in the league seems to have decided to do a similar thing as their aren't to many imports that have managed to stay in the league or with their old team. Its a big loss to the league to lose some amazing players in not only Kevin Lisch and Cedric Jackson we also won't be seeing the return of Adris "to hard to guard" Deleon or Lance Hurdle who in my opinion were two of the most entertaining players i have watched in the NBL. However as we see every year each team has done a very good effort at scouting for more up and coming talents with several players straight out of College. Ill go over a few of the big picks for imports for a few teams this season.

Woollongong has had a history of being able to pick some absolute standout imports like Lance Hurdle and Gary Ervin and bring them to the league and this year we hope it wont be any different. They have recruited a star shooting guard in Rotnei Clark who gained a lot of attention in college scoring a 65 point game and hopefully he can bring that firepower to the professional level. They also just announced the signing of import swingman Durrel Summers who looks like he can shoot which the Hawks have needed since Glenn Saville retiring last year.

Adelaide are looking very strong with a similar team to last year which now contains 3 players who have put on a Boomers Jersey and played at the international level. Not only that but they have taken Gary Ervin from Townsville to combine with Adam Gibson for a very strong backcourt combo. Not to mention Jason Cadee on the bench this should be a strong team if Joey Wright can do a better job of coaching then Marty Clack could, who in my opinion took a championship team to take the wooden spoon.

New Zealand has a huge gap to fill with the loss of Cedric Jackson who hopes to make it to the NBA and have opted for a player straight from college. Kerron Johnson was picked up from the Breakers scouting and looks to be perfect fit. Standing 6'1" Kerron has an impressive resume from college In both 2012 and 2013 Kerron was named to the All Conference 1st Team and won All Conference Tournament MVP ahead of fellow Belmont guard Ian Clarke (NBA Summer League MVP) and Isaiah Canaan, who both recently signed NBA contracts with the Utah Jazz and Houston Rockets respectively. This could be play out to be a great pick up if he can bring his skills to the professional level.


The Cairns Taipans have held onto Jamar Wilson as their point guard import and with several of their players getting some international experience in the world university games they look to be a tall and strong looking team. Townsville recuited their imports early and I have not heard too much as to what to expect but hopefully it will be a better pick up then their first two last year who were sent home before their first game.

The Perth Wildcats probably had the best pick up during the offseason securing James Ennis who was drafter at no. 50 in the 2013 NBA draft. Ennis was traded to the Miami Heat and the Wildcats have him rostered until the Heat require him in case of an injury. Ennis is an athletic 6'7" forward who has an impressive leap and can play in open space. This is a great pick up for the wildcats and will bring more NBA scouting eyes on the NBL with a potential future NBA player in the league. Look forward to seeing some exciting plays coming from the Wildcats with some big dunks hopefully to be seen.


The Melbourne Tigers have been looking dangerous in the preseason matches so far and have gone unbeaten. The impressive playing from Chris Goulding has reached a new level. I think his stint with the Cleveland Cavaliers summer league may have given him some confidence and since joining the Tigers he has improved in leaps and bounds from the streaky confidence player we saw with the Blaze. The Tigers have managed to recruit Mark Worthington back to the NBL and with his impressive skills to combine with Adam Ballinger's veteran shooting ability they are team to watch out for. They have recruited import US guard Stephen Dennis from the NBA D league. Standing 6'6" he may have the height and strength to be a competitive guard in the NBL.

From the the offseason recruiting and player advancement i have seen in the offseason i think it will bring the NBL back to more level playing field. But my predictions for the Top 4 for a large portion of the season to be..
New Zealand Breakers
Perth Wildcats
Melbourne Tigers
Adelaide 36ers.

If the Damien Martin can get healthy and the Hawks can adjust to playing in Geodie McLeod's system they may be up amongst the top four also. Having said, I am impressed with all teams this season and look forward to a closer matched league then last season.